Is it beneficial for an investor to invest in a mutual fund NFO?

Here is my article published in Mumbai edition of Mid-day Gujarati today. The paper is attached herewith. Below that, the English translation is given: 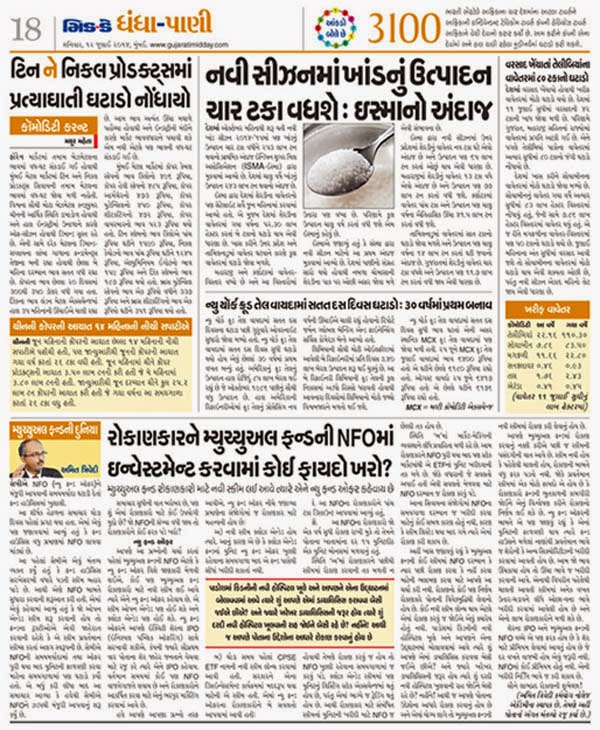 Is it beneficial to an investor to invest in a mutual fund NFO?
“Fund houses happy as NFOs get speedy nod from SEBI” – this was the news headline some time back. The news also added that there is a surge in the NFOs from fund houses.
At some stage, SEBI took a view that the fund houses were launching too many similar schemes and they started reforms, including a declaration from the trustees that the proposed scheme (if open-ended) is different from any of the existing schemes. It also cut down the time of the launch as well as the time for allotment of units after the closure of the NFO. However, it still took quite long to clear the offer documents. This process has now been streamlined as the news referred.
Well, that is as far as the news is concerned, but what is in it for the investors? What should an investor do if the number of NFOs goes up?
Before that, let us first understand what an NFO is. NFO means a New Fund Offer – this is the time when a new mutual fund scheme is offered to public for investment for the first time, whether the scheme is open-ended or close-ended. This is similar to equity share IPO, where the company offers subscription to its shares to public for the first time.
The NFO matters to an investor only in certain cases:
1.     In case of a close-ended fund, where the units are not available for subscription directly from the fund on an on-going basis after the NFO period
2.     Recently, there was a new scheme launched – CPSE ETF, to help the Government of India’s disinvestment program. In this case, the NFO investors were given two incentives
i.         There was a 5% discount to NFO investors,
ii.         The NFO investors, who stay invested for a year, would be allotted bonus units in the ratio of 1 unit for every 15 held in the account
In the first of the above cases, since the investor does not get a chance to invest in the scheme, one may consider investment during the NFO period. In case of a close-ended scheme, thought the units are listed on the stock exchanges, there is hardly any trading activity. In that case, NFO could be the last chance to buy into the scheme for an investor.
In the second case, there would be a market-making mechanism that provides liquidity. This would allow an investor to buy ETF units from the stock market after the NFO is over. However, the additional incentive is available only if the investment is made during the NFO period.
In all the other cases, there is no compelling reason to buy during the NFO period, since one can invest anytime after the scheme becomes open.
At the same time, this discussion should not be construed as recommendation to invest or not invest in any mutual fund scheme – either during the NFO or thereafter. An investor is advised to consider one’s own situation before taking any decision. Just because a new scheme is being launched, one does not have to jump to invest.
A new launch cannot be the reason of one’s investment. Can someone imagine going for dialysis just because a new kidney hospital has opened next door and one has been invited for the inauguration function? At the same time, nobody would wait for a new hospital to open when there is a need for dialysis.
Treat a new launch in an exactly the same manner. Identify your own objectives and then decide what kind of investment portfolio you want to build. After that comes the decision of scheme selection. It does not matter whether it is an existing or a new scheme. However, an existing scheme would allow an investor to analyse the past performance to take an informed investment decision.
Happy investing!
Amit Trivedi
The author runs Karmayog Knowledge Academy. The views expressed are his personal opinions.

Posted by Mahesh C Trivedi - The Karmayogi at 11:50 AM