Seeking your reviews about my book - Riding The Roller Coaster

Those of you who have read my book “Riding The Roller Coaster – Lessons from financial market cycles we repeatedly forget”, may I request you to spare some time and write a small review, please? You may do one or more of the following:
Looking forward to your support.
Posted by Mahesh C Trivedi - The Karmayogi at 8:09 AM 1 comment:

Mutual funds manage our money - almost everyone knows about this. However, most often, some of the other functions related to investing are forgotten. These are also taken over by asset management companies, making life very simple for investors. Click on the link here to read further ...

The English translation is as under:


“If I have Rs. 100 to invest, how much money should I invest in mutual funds and how much in stocks?” Recently, someone asked this question.
This is an oft-repeated question, asked in various forums and in many different ways. Some ask as a simple question as mentioned above. Some frame their questions using technical terminology as: “How much should I allocate to mutual funds out of a total fund of Rs. 100?”
What is the correct answer in such cases? Should you allocate 30% to mutual funds? Or does it depend on a person’s situation? Or risk profile? Or age?
The person asking such questions has probably not understood what mutual funds really are and is considering mutual funds as just another product – a substitute of stocks, for example.
Are mutual funds really another option for investing in stocks? It is important, hence, to understand what mutual funds are and how these are different from the traditional investment avenues.
A mutual fund is not an investment by itself, but outsourcing the investment management and administration function to a professional organization. Instead of investing in various instruments ourselves, we can outsource that job to a professional organization.
Within a mutual fund company, there are people that take care of some very important functions:
·      Fund management team: This team handles functions related to management of funds, which involve securities research, decisions regarding buying and selling of securities, execution of trades through brokers, and other paper work related to the same.
·      Fund accounting team: This team manages the accounting function related to the investors’ money invested in the scheme.
·      Registrar and transfer agency: This team is the record keeper of investor data and transactions. This team also maintains the records of unit balance in each of the investment folio. It also takes care of issuance of account statements, as well as dividends and various investor transactions in the folio.
·      Custodian: This is an outside agency and not part of the mutual fund company. They keep custody of the securities and settle trades with the clearing house of the stock exchanges, where the trade takes place. It is a security feature that the custodian is never part of the asset management company.
In other words, you get much more than just a portfolio manager by investing through a mutual fund. And, yes, just to reiterate, you also outsource the function of finding relevant and suitable investment avenues to professionals.
So, let us come back to the question asked in the beginning, “If I have Rs. 100 to invest, how much money should I invest in mutual funds and how much in stocks?”
The answer is, “You can invest all your money through mutual funds”. There are various different kinds of mutual fund schemes to cater to various requirements of investors. There are various conveniences built into these. You take your pick. Identify your need and go take the advantage of mutual funds.
- Amit Trivedi
Posted by Mahesh C Trivedi - The Karmayogi at 7:09 AM 2 comments:

Do you know the future?

Do you know the future?

#RidingTheRollerCoaster
Posted by Mahesh C Trivedi - The Karmayogi at 9:41 AM 1 comment:

It was exactly 10 years ago on 14th January 2007 that an article I had written appeared in main stream media for the first time. The financial daily was Business Standard and the article was entitled "Simple Things About Compound Interest". I thought of writing this article when I saw how some companies using misleading communication regarding interest rates offered on fixed deposits or on return on investment. Interestingly, after this article appeared in Business Standard, one such advertisement was removed by the advertiser from the billboards across Mumbai.

A decade later, the article is still relevant. 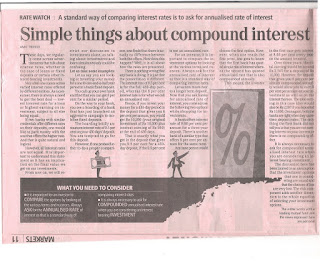 In these 10 years, 351 articles have appeared in various publications with the mainstream media taking the lion's share of 233 articles (roughly 2/3rd of the total published articles).
Thank you everyone - the publications, the editors, the editorial and support staff, the readers, the patrons, and friends & family. your support was phenomenal. Thank you God for giving me this opportunity.

An Advisor's Best Business Card - my talk on 25th January 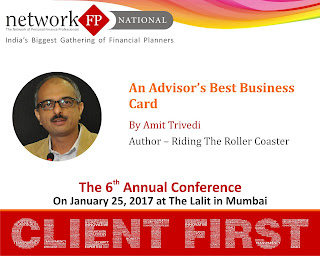 Posted by Mahesh C Trivedi - The Karmayogi at 3:20 PM 9 comments:

The article published today in Mid-day was my 100th article in my mother tongue, Gujarati:

Thank you all the readers, friends, patrons and family members.

Posted by Mahesh C Trivedi - The Karmayogi at 4:58 PM 1 comment:

Join me on the live chat today on www.moneycontrol.com today at 4:00 PM, if you have questions regarding mutual funds:

Large-cap or mid-cap, which funds are better? Or how do you evaluate these? Click on the link below to read my article in Mid-day Gujarati edition:

The English translation is as under:

Equity funds based on market cap bias
“Do you think mid-cap funds are better than large-cap funds?” This is a regular question these days from savvy mutual fund investors. On the other hand, when I look at some other mutual fund investors, their portfolios are heavily skewed towards mid-cap funds.
This is bound to happen. The mid-cap sector and the mid-cap funds have seen a dream run in the last few years. See the numbers below:
(Source: www.valueresearchonline.com)
The numbers are surely impressive for mid-cap funds – absolutely as well as in comparison to the large-cap funds.
It is this past performance that attracts many investors towards this sector. However, while the returns are visible, the risks are often not visible. In such a situation, investors tend to ignore the risk-return relationship, which says that in order to get higher returns, one has to be ready to take higher risks. In other words, the asset category that generates very high returns may carry higher risks.
Let us first look at what these fund categories invest into. The term “cap” in both large-cap and mid-cap is abbreviation of capitalization or market capitalization. This is the value the market has put on the entire company. In other terms, if one were to buy the whole company, the amount payable would be equivalent of the market capitalization of the company. It can be calculated by multiplying the market price per share with the number of shares issued by the company.
So the large-cap stocks are those belonging to companies with large market capitalization and mid-cap stocks are stocks of companies with mid-sized market capitalization. There are small-cap and micro-cap stocks also. The schemes get the category names based on where the money is invested, e.g. the mutual fund schemes that invest in large-cap stocks are known as large-cap funds.
As a general rule, large companies are leaders in their respective markets enjoying dominant position. Most of the times, these companies enjoy stable business conditions and are able to weather the storms better than the small and mid-sized companies. Thus, investment in such stocks turn out to be safer compared to the smaller counter-parts. At the same time, some of the small and mid-sized companies may turn out to be long-term winners and end up being large-cap and market leaders. Thus, the return potential could be immense. It is this return potential that lures investors towards such companies when the going is good. However, when the tide turns, investors tend to flock towards the safer large-caps.
The risk-return relation can be seen from the graph below:

(Source: www.valueresearchonline.com)
The above graph shows performance of BSE Sensex and BSE Mid-cap indices. The former represents the large-cap stocks, whereas the latter represents mid-cap stocks.
Take a look at the years 2009, 2011, 2012 and 2014. In all these years, the indices moved more than 20% up in 2009, 2012 and 2014 and more than 20% down in 2011. These are the only years with such large movements out of the last eight years shown in the graph above.
It is interesting to note here that in each of these four years of huge movements, the mid-cap index has witnessed a bigger move compared to the large-cap index (Sensex). In other words, when the stocks went up, the mid-cap stocks posted bigger gains and when the stocks went down, these posted bigger losses in comparison to large-cap stocks.
We can easily conclude from the above that while the returns in the last few years have been high, mid-cap stocks are subject to higher risks during an individual year, or even for a longer period, sometimes.
For example, if someone invested Rs. 1,00,000 in Sensex on January 1, 2011; the value of investments would be Rs. 1,03,234 after 3 years, whereas the same amount invested in BSE mid-cap would have reduced to Rs. 85,936.
It is important for anyone to understand the risk-reward relation while considering investment in various schemes. Looking merely at the recent past performance may not be enough to take a decision.
- Amit Trivedi

Posted by Mahesh C Trivedi - The Karmayogi at 7:01 AM 1 comment:

Vivek Reddy writes about the book - "Riding The Roller Coaster - Lessons from financial market cycles we repeatedly forget"
Posted by Mahesh C Trivedi - The Karmayogi at 8:22 AM 1 comment: